Propaganda images from various era, small children as murdered, stuck on the sharp end of a  bayonet by rampaging soldiers. Depraved and inhuman treatment of the innocents by warring parties, the perpetrators evil without redeeming value.Images of this sort a favorite of propagandists. 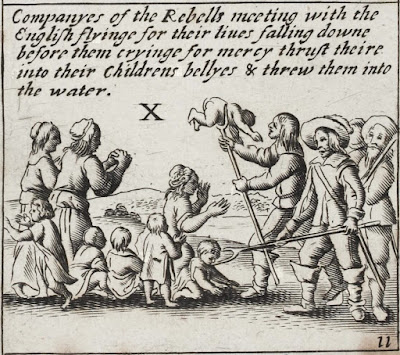 From a much earlier period small children first impaled with a pike-like device and then thrown into the water to drown. This might have been a scene from the Thirty Years War. 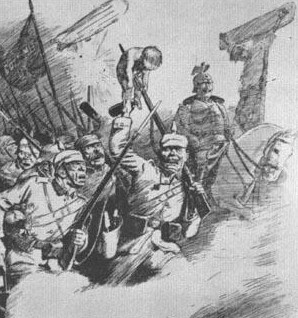 Snarling and grotesque German soldiers presumably from the time of the Great War advancing. That one troop has a small baby at the end of his bayonet. It might seem the Kaiser himself is leading the way, resplendent in his uniform. Crucified captured soldier also shown. The Brutal Hun. Beasts! 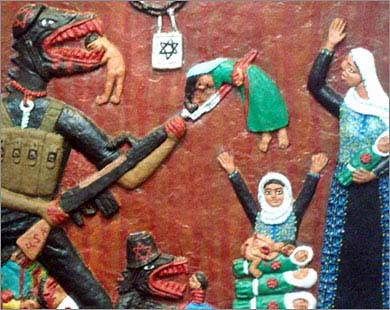 From the present day a Palestinian portrayal of the Israeli as a ravenous lizard, sub-human, devouring a small baby while at the same time bayoneting a child. Atrocity!

YOUR ENEMY IS A SAVAGE AND A BEAST, ACTING IN A WILD AND UNCONTROLLABLE MANNER! KILL HIM BEFORE HE CAN KILL YOU! SUCH IS THE MESSAGE.