With ships and missiles too! American and Russian both! Thanks to Freeper in both instances.

"The littoral combat ship [LCS] USS Milwaukee, the Navy's newest ship that was commissioned in Milwaukee in November, broke down at sea Friday and had to be towed more than 40 nautical miles to a base in Little Creek, Va.,"

"'Reporting of a complete loss of propulsion on USS Milwaukee (LCS 5) is deeply alarming, particularly given this ship was commissioned just 20 days ago,'" - - Sen. John McCain 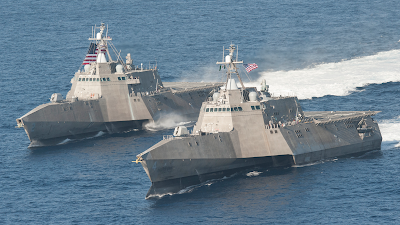 Recall that the LCS class is not supposed to operate far from the shore. Is a littoral vessel, designed to fight in what is called green- water and not a deep-water [pelagic] going vessel.

"A cruise missile [Russian] has gone astray after a test launch and fallen near a village in north-west Russia, but no one has been hurt, according to the Russian defence ministry."

"It said in a statement carried by Russian news agencies that the missile inflicted no damage when it fell on Tuesday near Nyonoksa on the White Sea coast in the Arkhangelsk region."

NO ONE KILLED, BUT!

"the missile hit a three-story building near Nyonoksa, causing a fire that damaged its roof and several apartments. There were no casualties,"

BACK IN THE DAYS OF THE OLD SOVIET UNION SUCH A MALFUNCTION OF A SOVIET MISSILE OF WHATEVER TYPE WOULD BE CLASSIFIED TOP SECRET. NOW THE WHOLE WORLD KNOWS AND IN REAL TIME.