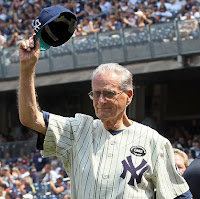 One of the good guys now newly departed but A HERO WHO SHOULD NEVER BE FORGOTTEN!

"Jerry Coleman, a former fighter pilot who played in six World Series as an infielder for the Yankees but who made his most lasting mark as a broadcaster, first for the Yankees and then more indelibly for the San Diego Padres, died Sunday near his home in San Diego. He was 89."

Jerry the journeyman baseball player of able and competent ability but not outstanding level during a time of war NOT eschewing his duty to this country. Rather the opposite.

Both in the Second World War and Korea seeing combat action as a pilot.

THE BEST YEARS OF HIS BASEBALL CAREER CUT SHORT BY MORE IMPORTANT DUTY! Jerry not a man to shirk his responsibility. Again, rather the opposite.

With regard to military service alone Jerry can be favorably compared to a Ted Williams, a Tyrone Power, Bobby Locke or an Edmund Hillary.

Outstanding if I must say so!! And do so.