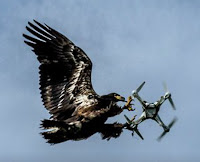 As it was in the days of yore so it is again now.

It being recognized that the commercially available mini-drone in all types as  purchased by terrorists are a possible weapon of war!

A solution however to this problem has been found?

Mini-drones having a multiplicity of applications in war time, to include intelligence gathering or reconnaissance, delivery of explosives on target, interference with commercial airliners during take-off or landing, the danger most acute.

The remedy in the ancient and venerable method birds of prey. Raptors!! In this specific instance apparently the golden eagle.

"Its wings beating against a gathering breeze, the eagle moves gracefully through a cloudy sky, then swoops, talons outstretched, on its prey below. The target, however, is not another bird but a small drone, and when the eagle connects, there is a metallic clunk. With the device in its grasp, the bird of prey returns to the ground."

Trained birds able to intercept and "bring down" the mini-drones when spotted. Danger averted.

Within the military and historical context this method of aerial intercept very rare but not so uncommon as might be believed.

* Crusader castles when besieged by Islamic armies able to communicate by carrier pigeon. Falcons as sent aloft by the Muslim able to intercept and "bring down" the Crusader birds. Crusaders denied to the advantage of the Muslim. The Muslim also able to develop military intelligence based on the content of those messages as "intercepted".

* French partisans in WW2 of the FFI [Free French Interior] also communicating with British SOE [Special Operations Executive] by carrier pigeon. Again, falcons as dispatched by German counter-intelligence able to intercept and "bring down" the pigeon messengers. Once more, when read, those messages as "intercepted" providing valuable military intelligence to the German.

Sometimes in war the old ways of doing battle are the best ways? Always have been and always will be!!