From the Sheldon Adelson Internet web site Israel Hayom this move should be seen by American authorities as ominous?

"After a pre-dawn barrage of heavy artillery and airstrikes, Turkey sent tanks and special forces into Syria on Wednesday to help clear a border town of Islamic State militants in Ankara's most significant military involvement so far in the Syria conflict."

The goal at this moment IS THE DESTRUCTION OF ISLAMIC STATE COMBATANTS! 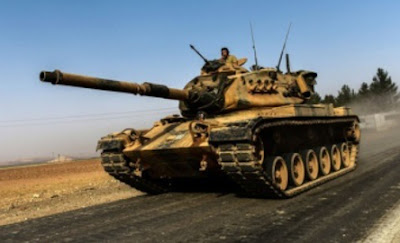 A tank of the Turkish army, an American M-60 that has recently been refurbished and improved? A Sabra?

THE TURK PERHAPS EVEN MORE IMPORTANTLY HAVING DESIGNS IN THE LONG RUN ON THAT ENCLAVE OF U.S. BACKED AND SUPPORTED ANTI-ASSAD SYRIAN KURDS?

"Turkey said its intention was to clear the Islamic State presence from the town of Jarablus, located right across the border from Turkey. But Turkey is also concerned about the growing power of U.S.-backed Syrian Kurdish forces, who it says are linked to Kurdish groups waging an insurgency in southeastern Turkey."

A move against those Syrian Kurds by the Turk would place America Special Forces and the military units of a NATO ally in direct conflict with one another?

This threat too might be used as a bargaining chip as part of negotiations for the return of Gulen to stand trial in Turkey for his role in the recent coup attempt. Biden might act as a repentant but to the Turk that might not be good enough?