From the Pritzker Military Library and Museum podcast, the eminent historian Sir Max Hastings being interviewed with regard to his book "Catastrophe". A history of the Great War [WW1]. 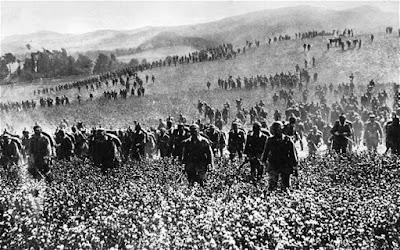 German troops circa 1914 in that first month of the war advancing through French [?] territory and moving cross-country. A tempting target for any French or British machine gunner. Reminds me of another image as seen in a previous blog entry.
Hastings stating in his book that the Schlieffen Plan as executed in 1914 was doomed from the start for two reasons:

1. Too much demanded from the German rank and file soldiers. The physical effort of the prolonged march as had to be sustained exceptionally rigorous.

2. Communications of the time too primitive. German commanders executing the operational art not able to coordinate their movements in consonance with the orders as issued by the General Staff in Berlin. Reliable two-way communications lacking!

That operational art the movement of large-size units to accomplish strategic goals.

Two other reasons also as cited by historians and military experts as being responsible for the failure of the Schlieffen Plan.

* The ability of the Russian to mobilize in two weeks [1914] as compared to the estimated four weeks as was thought to be the case in 1905.

Read further from the wiki entry for the Schlieffen Plan the various interpretations of the experts.

Devoted readers to the blog take it from there.