“The remnants of the Folgore division put up resistance beyond every limit of human possibility.” - - BBC.

"While the WWII Italian fighting man is often maligned in the US, the reality is many Italian men showed incredible bravery and dedication on the battlefield."

The ITALIAN MILITARY ENIGMA! Why did the Italian military in both world wars fare so poorly as perceived? THINK NOT ALL ITALIAN UNITS GUTLESS COWARDS NOT WILLING TO FIGHT HOWEVER.

QUITE THE OPPOSITE ON SEVERAL OCCASIONS.

The Folgore Division [paratroopers] at the Second Battle of El Alamein.

Thanks to the tip from Manteuffel:

"The heroic behavior of the Folgore Division during the Second battle of El Alamein in resisting the attacks of six British divisions (two armored and four infantry) inspired the respect and admiration of its enemy. Lacking effective anti-tank weapons, the Italian paratroopers managed to stop British tanks only with a few obsolete 47/32 guns and petrol bombs." 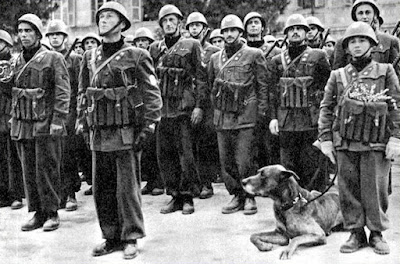 "The Folgore, having run out of water, withdrew from the El Alamein front at 2:00 a.m. on 3 November 1942, carrying their anti-tank weapons. At 2:35 p.m. on 6 November what was left of the division was captured by the British. They had exhausted their ammunition and destroyed their weapons, but refused to raise their hands in surrender or show the white flag."

See this previous blog entry the topic of which was Italian bravery and comportment on the WW2 battlefield: