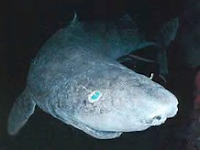 Consider this blog entry borderline germane but within the context of atomic munitions and atomic above-ground testing is valid.

"We tend to think of vertebrates as living about as long as we do, give or take 50 to 100 years. Marine species are likely to be very long-lived, but determining their age is particularly difficult. Nielsen et al. used the pulse of carbon-14 produced by nuclear tests in the 1950s—specifically, its incorporation into the eye during development—to determine the age of Greenland sharks. This species is large yet slow-growing. The oldest of the animals that they sampled had lived for nearly 400 years, and they conclude that the species reaches maturity at about 150 years of age."

That Greenland shark the longest-lived vertebrate! Lives normally in the depths of the Arctic ocean and contiguous waters. Might very well be a man-eater also

THAT ABILITY TO MEASURE THE LONGEVITY OF THE GREENLAND SHARK ONLY DUE TO ABOVE-GROUND NUCLEAR TESTING OF THE 1950'S. WHO WOULD EVER HAVE THOUGHT IT.

Who ever said atomics were not good for anything at all?