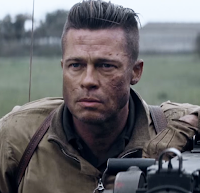 The character of Collier in the recent movie "Fury" is based on the real-life person of Lafayette G. Pool. Prior to my recent blog entry this I was not aware of. Devoted readers to the blog will forgive me

See the various trailers for the movie a this Internet web site.

From the trailers it appears the Sherman tank as commanded by Collier is actually a British Firefly tank but in this regard I am in error. That M4A3E8 was equipped with the longer-barreled 76 mm gun in the American inventory by at least August 1944.

Is that haircut of Brad Pitt REGULATION? At least the white side-walls are OK but I am not sure about the rest. Get that hair cut correct first if necessary and then let us talk tank tactics. We start from there.

Brad at age fifty plays the role of a much younger man [half his age] in a remarkable manner! Lafayette G. Pool age twenty-six at the time of WW2.

But then Brad is an actor. He should be able to play the role of a man much his junior and do so with panache' and does!