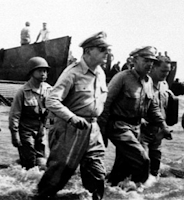 As seen at the Professor Victor Davis Hanson website:

Regarding the "controversial legacy" of Douglas MacArthur here in the nutshell as extracted:

"There are a number of writs against MacArthur, but perhaps three stand out."

1. First, there is no doubt that his narcissism could reach obnoxious proportions.

2. Second, MacArthur’s most brilliant victories — the Operation Cartwheel re-conquest of much of the Japanese-held South Pacific and the brilliant Inchon landings near the Korean DMZ — were bookended by equally disastrous failures

3. Third, MacArthur was not just a controversial man of the Right — so were Generals Curtis LeMay and George S. Patton — but was actually, for nearly 20 years, seriously considered a possible ultra-conservative Republican candidate for the presidency . . . no other general in American history has been judged as much on his political beliefs as on his performance on the battlefield.

MacArthur also # 1 caught flat-footed in the immediate aftermath of Pearl Harbor, # 2 twice within a period of six months surprised in Korea, those forces under his command in each instance put to rout by a superior opponent. Perhaps those events of 1941 I can understand but those of 1950 I cannot. The man and his staff had enormous experience by that time and should have done a much better job.

That Professor Hanson analysis of MacArthur based his reading of a "new biography" by the author Arthur Herman.

NEVER can you get enough Douglas MacArthur.