Thanks here in all instances to the Atlantic, Andrew Sullivan and Martin van Creveld. Sentiments as expressed  by the two esteemed authors also exactly mine.

1. "Why I Blog" by Andrew Sullivan

"For centuries, writers have experimented with forms that evoke the imperfection of thought, the inconstancy of human affairs, and the chastening passage of time. But as blogging evolves as a literary form, it is generating a new and quintessentially postmodern idiom that’s enabling writers to express themselves in ways that have never been seen or understood before." 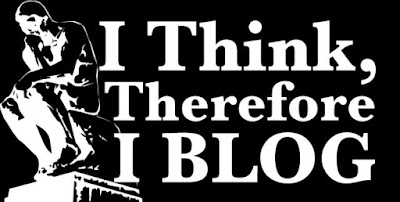 "The word blog is a conflation of two words: Web and log. It contains in its four letters a concise and accurate self-description: it is a log of thoughts and writing posted publicly on the World Wide Web."

"This form of instant and global self-publishing, made possible by technology widely available only for the past decade or so, allows for no retroactive editing (apart from fixing minor typos or small glitches) and removes from the act of writing any considered or lengthy review. It is the spontaneous expression of instant thought—impermanent beyond even the ephemera of daily journalism"

"Finally, why do I do it? Being a fairly well known academic, over my lifetime I have published dozens of books in twenty different languages. I have also been interviewed by numerous TV stations, radio station, magazines and newspapers around the world—so many that I have long stopped counting. Not to mention articles I myself wrote"

"Yet nothing gives me the sense of freedom which, sitting down week by week, I have when working on my blogs. Freedom from the kind of control many editors will impose on your work. Freedom to say what I want, on any subject that comes to my mind, in the way, and at the time; and freedom to do so regardless of the laws Israeli ministers and MKs, [members of the Israeli legislature the Knesset] to their eternal shame, are trying to pass."

Amen!! Once more thank you Andrew and Martin. I couldn't have said it better myself.