From  MARCONI through Harry at Sharkhunters:

"Washington, D.C.  The U.S. Air Force is considering two new procurements to boost their close air support mission, including an off-the-shelf option for permissive environments and a cheap, clean-sheet design aircraft that would replace the Fairchild Republic A-10."

The USAF having a rapid need for a new Close-Air-Support [CAS] aircraft. Albeit one that can operate in the "permissive environment".

"To meet that rapid need, the service is examining two fully-developed aircraft, Beechcraft's AT-6 and Embraer's A-29 Super Tucano, and are planning a fly-off for this fall." 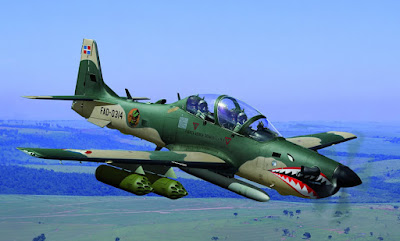 Permissive environments! American aircraft in an area of operation where there is a low to nil chance of shoot-down by enemy air defenses. Those air defenses to include surface-air-missiles [SAM] OR anti-aircraft-artillery [AAA].

THE A-10 THUNDERBOLT DESIGNED TO OPERATE IN A HIGHLY NON-PERMISSIVE ENVIRONMENT OF THE RED ARMY. SAM AND AAA IN ABUNDANCE.

A-10 very redundant, two engines, dual tail, titanium "bathtub' cockpit with windshield that can withstand a 23 mm gun round, etc.

A-10 able to take a lot of punishment all the while dishing about a lot of aggravation for the adversary.

From Tee see seen at an aviation forum this item perhaps most pertinent and important regarding a replacement for the A-10:


"Super Tucano has been battle-tested . . . The US should buy a few squadrons of these, they are perfect for all the little Dirt Wars we get into . . . they cost less than 10% per flight hour than any of our jet power aircraft being used currently for CAS".

BUT PERMISSIVE ENVIRONMENT ONLY!!