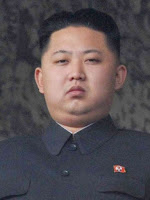 Roly-poly but having nuclear weapons? That is the question?

"Based on actuarial tables, no insurance company is likely to issue him a life policy."

"He will be 33 years old on January 8, but over the past four years his weight has ballooned from 198 pounds to 287. He parties, he smokes, he drinks heavily. He runs a country-a role in which he has had to make some very stressful decisions, such as which family members to execute. All this seems to be taking a toll on his health."

"South Korea's leadership, which closely monitors on-going activities to the north including Kim's health, has been trying to get a handle on the Hermit Kingdom leader's physical condition. With Pyongyang's 'Pillsbury Doughboy' putting on an average of 22 pounds of additional bulk per year for four years, Kim's health has become a matter of national security for Seoul."

THINK RATHER AS I INSTANTLY DID OF TIBERIAS, CALIGULA AND NERO FROM THE TIME OF THE ANCIENT ROMAN EMPIRE. BUT THIS TIME THE VILLAIN HAVING ATOMIC MUNITIONS AT HIS DISPOSAL.

P.S.: This blog entry from some time ago and when edited Blogger showing as a new post. Forgive me.