As I had thought to be the case has come true. The Ukraine Conflict.

The inclusion of Chechens among the fighting men of the Russian forces used as "blocking units" and disciplinary troops has come a cropper.

Buryats and Chechens at odd. Over spoils of war!!

"Infighting Breaks Out Between Russian Soldiers"

From Beyond News.org and thanks to same.

"Russia’s war against Ukraine is taking an ever more bizarre and humiliating turn for Moscow."

"In this case, Chechens and Buryats fell out and started shooting at each other in de facto tribal warfare, leaving dozens of dead on both sides." 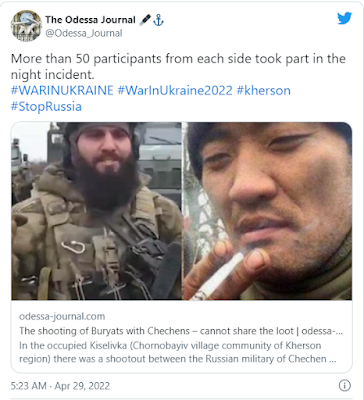 Chechen on the left distinguished by the full-length beard. Buryat on the right with the Oriental appearance.

"In the incident near Kherson, a Chechen death squad got into a shooting fight with a Russian unit made up primarily of ethnic Buryats, one of Russia’s Asian ethnicities.

"The conflict broke out because the two units in question fell out over 'looting rights', and because the Buryats were supposed to man the very front of the Russian lines, with Chechens in the back."

"The Chechens vs. Buryat shooting killed and wounded dozens of Russian troops on both sides; the end result was a 'victory' for the Buryats, according to Ukrainian sources."

* When the disciplinary troops are out of control you know things are bad.

* Loot and spoils of war high on the agenda for some Russian troops? That was an aspect of the Red Army behavior during the Second World War [WW2]. Victors get the spoils. Done on both the macro and micro scale.

* The modern Russian army has revived the institution of distinct ethnic and national units? That was the case during WW2 also. Cossacks, Georgians, Kalmucks. Such units not used in the aftermath of WW2. Found to be unreliable.