From the "War is Boring" Internet web site and the article by FEATUREDWIB LAND May 3, 2022 Staff Writer.

I would hope this NOT to be so but it seems to BE so!

"The situation in Kharkiv is becoming rather desperate as casualties and atrocities mount- including dead Russian soldiers being arranged into a 'Z' pattern."

"The carnage that has taken over the city is the result of sustained heavy combat between Ukrainian and Russian troops, which has been raging since the early moments of the conflict."

"At one crossroads, the charred body of a Russian soldier overlooked four of his comrades’ corpses, which were laid out in a “Z” pattern, a non-cyrillic symbol associated with Russian forces." 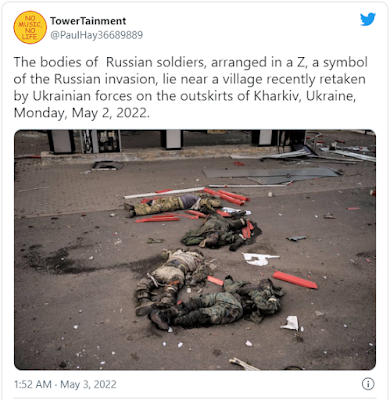 "According to the Associated Press, the display could be considered a war crime, as it is a disrespect of the dead."

Indeed, making a mockery of the vanquished foe by displaying their remains in such a fashion is a violation of the Rules of Land Warfare.

Ukrainian soldiers! Without question or reservation this type of behavior IF engaged in by your troops must stop! Do not do this even if your hate of the enemy very strong, your anger without bounds. You disrespect yourself in the process as military men and must act in a more disciplined manner, even if your emotions get the better of you. Respectfully Bert.