From H.I. Sutton at the  Internet web site "Covert Shores" an evaluation probably 100 correct the danger to the Irish from the Poseidon/Status-6 Russian nuclear-armed nuclear-powered torpedo.

"A segment aired on Russia-1, a state-owned TV channel, appears to be aimed at a British audience. The video amounts to a threat, showing how the Poseidon nuclear-armed torpedo could be used to destroy Britain. Wipe if off the map, if the graphic is to be believed."

AND in the process DESTROY all of Ireland as well. [click on below image to see an enlarged view] 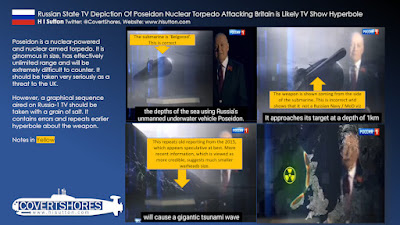 "Poseidon is to be taken very seriously. But this video should not. It contains errors and repeats unsubstantiated claims and hyperbole."

"Poseidon is a new category of weapon, and it has the potential to shape the defense needs of the UK and NATO allies. It threatens to devastate coastal cities, and is a threat to the whole of the UK. It will be very difficult to counter and require new weapons to intercept it. But the Russia-1 segment is not a credible source for information on this threat."

Again, the narrator of those video widely disseminated a KNOWN sycophant for Vlad.

And thank you H.I. Sutton your insights most valuable.