From the palestinianchronicle.com and thanks to same. May 4, 2022.

THIS ALL NEEDS TO BE CLARIFIED WITH 100 % TRANSPARENCY SPELLED-OUT AND WITH UNDENIABLE UNDERSTANDING!

"The Russian Foreign Ministry said on Wednesday that Israeli mercenaries are fighting with the ultranationalist [neo-Nazi] Azov Battalion in Ukraine."

"In an interview with Russian Sputnik radio, Maria Zarakhova, a spokeswoman for the Russian Foreign Ministry, said that 'Israeli mercenaries are practically shoulder to shoulder with Azov militants in Ukraine'." 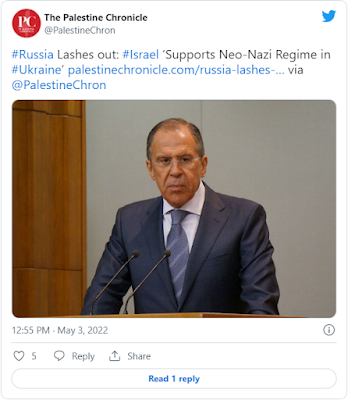 "The Azov Battalion is an ultranationalist, far-right militia that was formed in May 2014 out of the ultra-nationalist Patriot of Ukraine gang and the neo-Nazi Social National Assembly (SNA) group, to fight pro-Russian separatists in the Donbas region."

NOT Israeli mercenaries SENT by the Israeli to fight WITH neo-Nazi groups the Ukraine. Ukrainians who are of Jewish ethnicity and HOLDING dual Ukrainian-Israeli citizenship fighting with Azov battalion! Hardly hired guns soldiers-of-fortune.

This is all Russian PARANOIA and extreme DELUDED thinking that doesn't do anyone any good!