The "dark forces" at work. The devil made me do it! 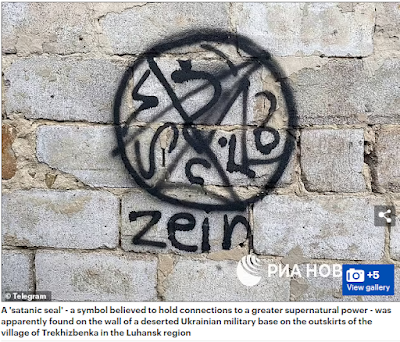 "A satanic seal -  a symbol believed to hold connections toa a greater supernatural power - was apparently found on the wall of a deserted Ukrainian  military base on the outskirts of the village of Trekhizbenka in the Luhansk region." Thanks the image from RIA Novosti.

Devoted readers to the blog make what you will of this. In the African context this would be referred to as juju or muti. Incantation, supplications, wearing of amulets. During a time of war ensuring success, your adversary reduced to ruin, crushed and subdued, your safety in battle guaranteed!

Remember it works only if you believe it works!