Defections and those swearing true faith and allegiance to ISIL regrettably continue. Thanks to a special hot item from DEBKAfile that tip from Freeper. 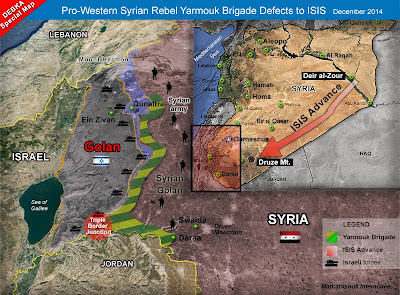 "The Syrian rebel militia Al Yarmouk Shuhada Brigades, backed and trained for two years by US officers, mostly CIA experts, in Jordan, and supported by the Israeli army, has abruptly dumped these sponsors and joined up with the Islamic State in Iraq and Syria, DEBKAfile’s exclusive military and counter-terrorism sources reveal."

"The sudden defection of this 2,000-strong anti-Assad force leaves IDF defense formations on the Golan, US and Jordanian deployments in the northern part of the kingdom, and pro-Western rebel conquests in southern Syria in danger of collapse."

That Yarmouk Brigade have tossed their lot in with ISIL. Those rebels opposed to Assad and TRAINED AND SUPPORTED BY AMERICAN ENTITIES NOW TAKE THEIR COMMANDS FROM THE CALIPH!

Also had been counted on [?] by Israel to guard the Golan Heights and that border separating Syria and Israel preventing incursions by ISIL combat elements. Reasonableness now replaced with extreme militancy and this cannot be but worrisome to the Israeli.