Yet another instance of those inspired by and swearing allegiance to Caliph Ibrahim and the Islamic State [ISIL].

Now a world-wide phenomenon, the umma to an extent finding a fulfillment to their aspirations. 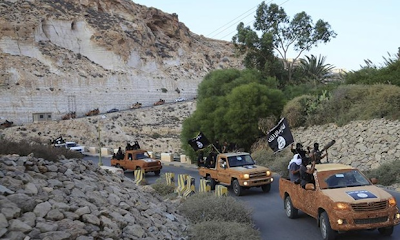 Here purported to be a convoy of technicals flying the ISIL battle flag, the Libyan jihadists having sworn allegiance and true faith to the Caliph. Toyota pick-up truck preferred, heavy machine gun mounted in the bed, a rebel warlord demonstrating his force and gaining esteem by the number of such vehicles as he is able to bring to the battlefield.

"It is a warm October evening in Derna, a small town on Libya’s north east coast, 450 miles from the capital, Tripoli."

"The main square is packed with young men, brought by a summons from the town’s self-proclaimed emir to swear allegiance to a newly formed Islamic caliphate."

With the end of the autocratic and despotic Ghaddafi regime a vacuum has been created into which flows the extremist philosophy of the Salafist which has an appeal to many young Muslims.

Hold on to your hats everyone  This is going to be a long and bumpy ride.