First there was FENCER and now there is FULLBACK!

Fullback the NATO code name for the most recent and latest deployed Russian combat warplane. A aircraft apparently [?] having a mission that can be both tactical and strategic!

The low-level supersonic fighter-bomber [with emphasis on bomber] versatile performing a variety of missions and doing them all well!

"Based on Sukhoi Su-27 'Flanker', the two-seat Su-34 is designed for tactical deployment against air, ground and naval targets (including small and mobile targets) on solo and group missions in daytime and at night, under favourable and adverse weather conditions and in a hostile environment with counter-fire and EW counter-measures deployed, as well as for air reconnaissance." 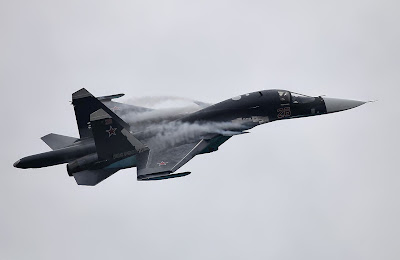 "The Sukhoi Su-34 . . . NATO reporting name: Fullback) is a Russian twin-seat fighter-bomber. It is intended to replace the Sukhoi Su-24."

A long-range strategic mission within the capability and it having been designed so from the start? Comfort of the two-man tandem crew a major consideration!

"Much of the design work went into crew comfort. The two crew members sit side by side in a large cabin, with the pilot-commander to the left and navigator/operator of weapons to the right . . . Since long missions require comfort, the pressurization system allows operation up to 10,000 metres (32,800 ft) without oxygen masks, which are available for emergencies and combat situations. The crew members have room to stand and move about the cabin during long missions. The space between the seats allows them to lie down in the corridor, if necessary. A toilet and a galley are located behind the crew seats . . . The cockpit is a continuous capsule of armor."

With in-flight refueling the Fullback capable of providing a "global reach"! Exercises involving a fully loaded Fullback in the long-range mode of mission already demonstrated:

"The Su-34's long range was shown in a July 2010 exercise when Su-34s and Su-24Ms were moved from Russian bases in Europe to one on the Pacific coast, 6,000 kilometres [3,750 miles] away, which requires in-flight refuelling. The exercise included aircraft carrying weapons at full load, simulated delivering them on a target before arriving at the Pacific coast base. Su-24Ms were refuelled three times, while the Su-34 was refuelled twice."

A Russian combined strategic aviation force consisting of BEAR, BLINDER, BLACKJACK,  MIDAS, MAINSTAY and FULLBACK using stand-off weaponry posing a significant threat to an adversary! Fullback in particular able to make that low-level supersonic dash in advance of the heavy bombers, using air-to-ground missiles to obliterate radars, dispersal airfields and enemy air defense? This is do-able and should now be anticipated!