"WHY IT'S CALLED SHERIDAN ROAD" (or how the general saved Chicago)

From the article in the Chicago Tribune "CHICAGO FLASHBACK" by Professor Ron Grossman.

Little Phil. Phil Sheridan, famous general from the time of the American Civil War and whose destiny seemed to be inextricably linked to the city of Chicago.

The Battle of Cedar Creek. Victory from the jaws of defeat as they say.

AND those Chicago Tribune headlines from one hundred fifty years ago:

"MORE THUNDER FROM THE SHENANDOAH."

"A CRITICAL SITUATION TURNED TO A VICTORY."

"Sheridan's a Appearance Saves the Day and the Army."

"To Chicagoans scrambling to catch a bus at Belmont Avenue and Sheridan Road, the statue of a man on a horse probably fades into the urban blur of their daily commute. The busy corner doesn't lend itself to pondering questions at the intersection of art and history. Like why the name on the statue, 'Sheridan', is also that of the nearby street. Or why Sheridan Road runs 20 miles north to the former site of Fort Sheridan; a military base set amid the bucolic North Shore suburbs that closed in 1993." 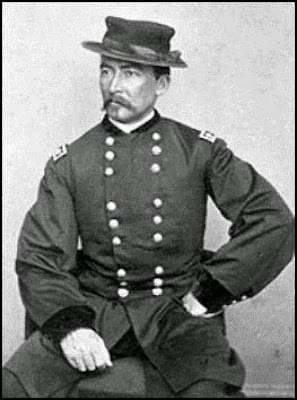 Phil Sheridan in the famous photo as taken by Matthew Brady. Phil was only 33 years old at the time. A most courageous commander who led with panache', able to assume a personae and use theatrics as a leadership style to inspire those troops under his command. Quite often described as a man of diminutive stature. But then too so was Napoleon.