First KW, then Normandy and the Atlantic Wall.

A portable anti-tank obstacle captured in enormous numbers by the German and used as a barrier intended to thwart the allied landing craft coming ashore at Normandy, D-Day!

"The Cointet-element, also known as a Belgian Gate or C-element, was a heavy steel fence of about three metres [nine feet] wide and two metres [six feet] high, typically mounted on concrete rollers, heavily used as a mobile anti-tank obstacle during World War II . . .  Besides its use as barricade to the entrance to forts, bridges and roads, the heavy fences are most-known for their use in the Belgian Iron Wall of the KW-line and the re-use as beach obstacles on the Atlantikwall. 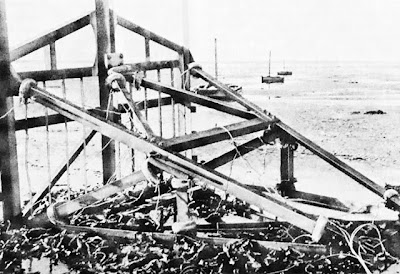 "The gate illustrated has been rigged with explosive 'sausages' for demolition using a technique described in the article on UDT." NO LESS than sixteen demolition charges required to destroy and collapse a C-Element in such a fashion that landing craft would be able to pass over the pile of junk in an unhindered manner.
"The Cointet-element formed the main barricade element of the Belgian KW-line, a tank barricade that was built between September 1939 and May 1940."

"Thousands of Cointets were installed on the KW-line between the village Koningshooikt and city Wavre to act as the main line of defence against a possible German armoured invasion through the heartland of Belgium, forming one long iron wall. The Cointet-elements were placed next to each other in a zigzag-line and connected with steel cables."

"Large numbers of gates were brought to Normandy during the construction of the Atlantikwall to be used along the other wide variety of beach obstacles. Instead of connecting them, the Germans used them singly next to other items, especially at the low tide line . . . Notes from 1944 cite the placement of 23,408 Cointets over 4340 km of coastline."

Those forerunner of the modern American SEAL the underwater demolition team [UDT] combat swimmer whose task was to place the charges in place and blow the obstacle, clearing a path for allied landing craft.

That KW Line ineffectual but the Belgian Gates acknowledged as effective and put to good use by the German. Casualties among the American UDT teams very high, men repeatedly exposing themselves to enemy fire heedless of the danger. American troops sadly also hiding amongst the gates seeking shelter on occasion also blown to bits by the detonations.