From that era of the Second World War [WW2] a weapon I  had never heard of before. Maybe devoted readers to the blog as well?

"The FP-45 Liberator was a pistol manufactured by the United States military during World War II for use by resistance forces in occupied territories."

Single-shot, .45 [11 mm] caliber, smooth-bore handgun as to be used by insurgency units. 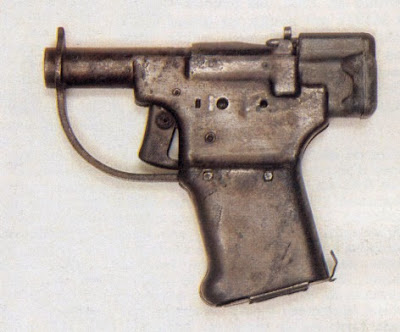 FP-45. Crude but never intended to be anything but that!

"The Guide Lamp Division plant in Anderson, Indiana assembled a million of these guns. The Liberator project took about six months from conception to the end of production with about 11 weeks of actual manufacturing time, done by 300 workers."

"The FP-45 was a crude, single-shot pistol designed to be cheaply and quickly mass-produced . . . It fired a .45 caliber pistol cartridge from an unrifled barrel. Due to this limitation, it was intended for short range use, 1–4 yards (0–5 m)."

"It was originally intended as an insurgency weapon to be mass dropped behind enemy lines to resistance fighters in occupied territory. A resistance fighter was to recover the gun, sneak up on an Axis occupier, kill or incapacitate him, and retrieve his weapons."

We sneak up on the enemy troop and fire a shot at a distance of one yard [meter]. That is all there is to it. 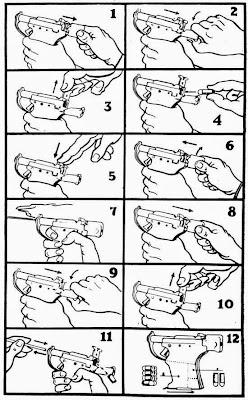 Load, fire one round, eject. A million men each doing this once and the war is over.

"The pistol was valued as much for its psychological warfare effect as its actual field performance. It was believed that if vast quantities of these handguns could be delivered into Axis-occupied territory, it would have a devastating effect on the morale of occupying troops."

ONE MILLION OF US SNEAK UP ON THE ENEMY AND ALL FIRE ONE SHOT! EVEN BETTER!

The intention was good but the hustle was wrong? You decide!