From a prior blog entry:

"Before there was ISIL THERE WAS THE DERVISH!"

"At least for a period of over one hundred years you cannot find an example of an irregular military force having enjoyed such success as has ISIL."

"That only prior example of irregulars defeating a conventional military force and doing so in such a complete and irrevocable manner, almost leisurely so, being the obliteration of the "Anglo-Egyptian" army under the command of Hicks Pasha at El Obeid."

NO! I stand corrected and do so without shame.

Having forgotten but recently remembered the Toyota War from 1987. Irregular combat "troops" as best can be described from Chad in mortal combat with the units of the Libyan army as was the case under the rule of the late Colonel Ghaddafi.

Those units of the Libyan army also in irrevocable rout and utter disarray totally obliterated by irregulars the main combat fighting vehicle of which was the ubiquitous Toyota pick up truck [a technical]. 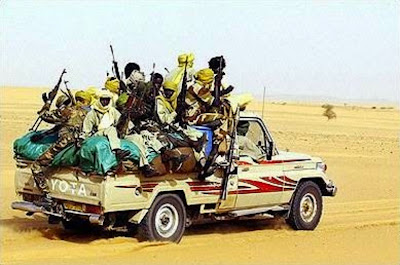 "The Toyota War is the name commonly given to the last phase of the Chadian–Libyan conflict, which took place in 1987 in Northern Chad and on the Libyan-Chadian border. It takes its name from the Toyota pickup trucks used as technicals to provide mobility for the Chadian troops as they fought against the Libyans. The 1987 war resulted in a heavy defeat for Libya, which, according to American sources, lost one tenth of its army, with 7,500 men killed and US$1.5 billion worth of military equipment destroyed or captured. Chadian losses were 1,000 men killed."

MANY OF THOSE LIBYAN DEAD ENLISTED MEN ABANDONED BY THE OFFICER CORPS, PRIVATES WANDERING THE DESERT SANDS UNTIL DEATH BY DEHYDRATION!

THAT AMOUNT OF SOVIET ERA MILITARY HARDWARE ALSO CAPTURED INTACT IMMENSE. IT IS NOT LIKE THE LIBYAN DID NOT HAVE THE MATERIAL WHEREWITHAL FOR THE FIGHT. THE SPIRIT AND WILL WAS LACKING.