Once more from Al Arabiya:

My instantaneous thought when reading this headline from Al Arabiya was Warden's Five Rings. 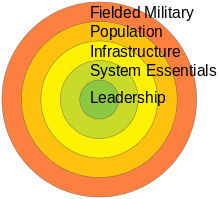 THAT PRIMARY GOAL OF MILITARY COMBAT AVIATION DURING WARTIME TO DESTROY OR NEUTRALIZE THE ENEMY LEADERSHIP.

THAT APPLICABILITY IN THE IRREGULAR TYPE OF WARFARE SCENARIO CHALLENGED!!

"Eliminating key leaders is a means to disrupt plots and degrade capabilities. But they do not defeat or destroy terrorist organizations," said Bruce Riedel, a former CIA agent and adviser to U.S. President Barack Obama who is now a leading terrorism expert."

"the real impact is hard to quantify, especially as the command structure of ISIS is largely a mystery to intelligence services, with its members masters at disguising themselves through a multitude of false identities, nicknames and noms de guerre."

"And the Western view of a pyramid-like command structure with a supreme leader, deputies and cascading line of subordinates does not take into account a reality where tribal, regional, cultural and historical ties often take precedence."