As was stated in a previous blog entry, at least in over forty years I have not seen that juxtaposition of Santa Claus with the military dimension.

Until now that is.

"'The cropped image of Santa Claus about to be beheaded isn’t just part of the Islamic State’s humor or entirely a joke. It emanates from a supremacist worldview that seeks the forced extinction of all contrary beliefs.' 'Islamic State Mocks US With Photoshopped Santa Held Hostage,'” 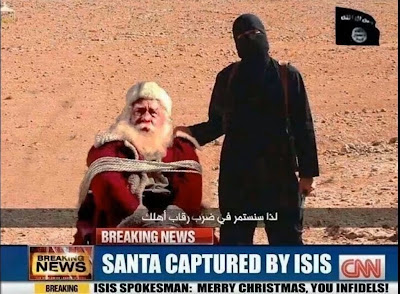 That is not a real person about to have his head cut off be aware. A photoshop image extracted, copied and paste onto another image using photoshop type editing software.

The real and true Saint Nicholas it should be noted FROM that part of the world [the Middle East], an Anatolian.

"Merry Christmas you Infidels!". Those being however the true sentiments of those ISIL adherents, very hateful!!