First accused, then charged, now having made the first court appearance.

And innocent until proven guilty in a court of law, at least by American standards.

"They are young, they are aggressive, they drink a lot!"

1. "US refuses to hand over marine accused of killing transgender Filipino"

"The United States embassy in Manila has turned down a request from Philippine authorities to hand over a marine accused of the killing of a transgender Filipino, a move that could spark anti-American protest in the former US colony."

"Prosecutors in the Philippines have filed murder charges against a US marine accused of killing a Filipino transgender woman in a case that has fanned anti-American sentiment."

"A United States Marine accused of killing a transgender Filipino appeared in court for the first time on Friday, as his lawyers sought the suspension of the trial, in a case that could test the strength of security ties between the two allies." 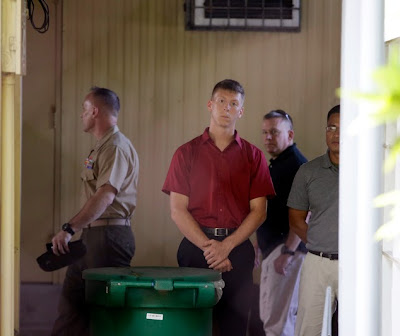 Mr. Pemberton faces the camera in this image. This man is in serious trouble.

Mr. Pemberton having met a met a person HE OBVIOUSLY THOUGHT WAS A WOMAN. MR. PEMBERTON HOPING FOR A ROMANTIC INTERLUDE BUT MUCH TO HIS DISMAY QUICKLY FINDING OUT THAT LAUDE HAD ORIGINALLY BEEN A HE! Mr. Pemberton then responding in an emotional and violent manner. That is how I see it.