"It is almost sad that the jet engine matured when it did. It was the deathnell of some of the most advanced aeronautical designs ever seen. The XF5U for instance."

This XF5U I had never heard of before. 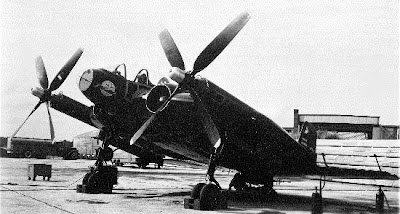 The "flying Flapjack" having characteristics inherently advantageous for carrier and naval aviation operations? HIGH speed in flight but LOW speed during take off and landing?

"The configuration was designed to create a low aspect ratio aircraft with low takeoff and landing speeds but high top speed."

THOSE PROPELLERS ARE TOO BIG? Landing of the airplane having to be text-book perfect or catastrophic disaster the result. 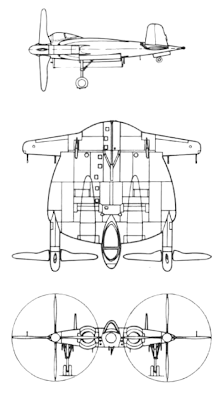 This schematic better shows the "flapjack" lifting body of the fuselage.

The "Flapjack" reminds me too of some of those innovative German designs from the same period and as illustrated at Luft46.

That brute force approach of using the jet engine to obtain high speed of course preferred over the elegant and sophisticated aeronautical design. Rocket engines allowing for even higher speed but that throttle control and fuel volatility too great for practicality?