"the longest raid in the military history of the world of an armed formation,”

Think rather of the the Mongols and their reconnaissance in force of the Caucasus region and southern Russia, 1222!

"They appeared in 1222 as suddenly as if they popped out of the ground . . . The Europeans heard that some of the strange horsemen were called Tatars . . . inhabitants of Tartarus, the nether region [hell]"

In the aftermath of the conquest and obliteration of the Khwarezm Empire Genghis Khan dispatching three tuman [about 10,000 troops in a tuman] further westward, a circumnavigation of the Caspian Sea. Commanded by generals Subotai and Chepe' the purpose to scout out the land, determine the feasibility of future military operations. 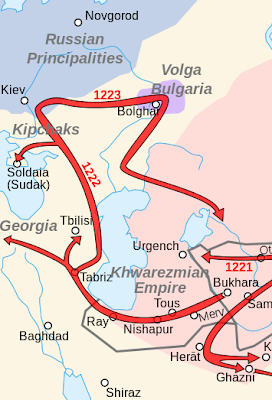 This image as extracted and edited showing the path of the three tuman!

"Europe had seen for the first time the Mongols of the Gobi. It was not a full-scale invasion, but a reconnaissance in force, although it was led by two of the three greatest cavalry generals in history: Subotai Bahadur and Chepe' Noyon  . . . They had only three divisions of the Mongol Army . . . called tumans . . . But Subotai and Chepe' had collected an enormous amount of information, from observation and prisoners, about the lands west of the steppes."

Those of an excessively pedantic disposition might argue about the distinction between a raid and a reconnaissance in force! Devoted readers to the blog can weigh in on the matter if they feel so inclined!