Big Red moves west. As it was the the Second World War the Soviet/Russian organizes high-level looting?

From UPI By Adam Schrader.

Trophy units reminiscent of WW2 Soviet behavior an integral and planned part of the Russian campaign. 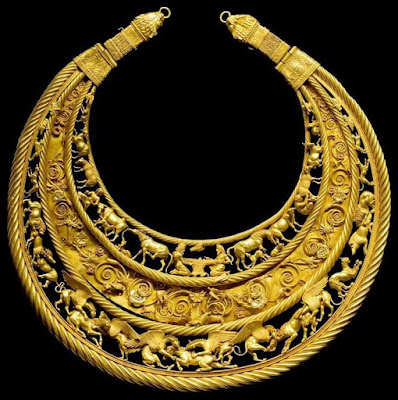 "The Golden Pectoral, a neckpiece, is an ancient Scythian artifact found in a burial kurgan at a site in southern Ukraine in 1971. Photo courtesy D. Kolosov/Wikimedia."

AN ARTIFACT PRICELESS AS THEY SAY. AND ONLY PART OF A COLLECTION OF SIMILAR OBJECTS.

"'The orcs [Russians' have taken hold of our Scythian gold,' Melitopol Mayor Ivan Fedorov said, according to Ukrinform -- the nation's information and news agency."

Also according to Ivan: "'This is one of the largest and most expensive collections in Ukraine, and today we don't know where they took it, whether it was hidden or stolen. We don't know about its fate, but of course this gold has been stolen from our community, and I hope that we will be able to get it back.'"

Soviet Red Army trophy brigades during WW2 famous/infamous for their looting of anything of a scientific/industrial/cultural value in those countries as conquered/liberated from Nazi control. Well-organized pillagers their avarice knowing no bounds.

Read further from several sources the activity of the Trophy brigades: