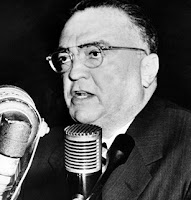 J. Edgar Hoover style! Everything you always wanted to know about American Gladio but were afraid to ask.

"WASHINGTON — Fearing a Russian invasion and occupation of Alaska, the U.S. government in the early Cold War years recruited and trained fishermen, bush pilots, trappers and other private citizens across Alaska for a covert network to feed wartime intelligence to the military, newly declassified Air Force and FBI documents show."

“'The military believes that it would be an airborne invasion involving bombing and the dropping of paratroopers,' one FBI memo said. The most likely targets were thought to be Nome, Fairbanks, Anchorage and Seward".

American Gladio in existence for only eight years. Under military control but promoted by and with the involvement of the FBI most apparent. THE FBI IN SECRET HAVING AN ORGANIC COMBAT CAPABILITY UNKNOWN TO THE PUBLIC?

ALASKA BECOMING A STATE WITHIN THE UNION WASHTUB DEACTIVATED? APPARENTLY SO!