Vlad has a problem?

From Freeper as seen almost in entirety.

"Russia's sole aircraft carrier, the Admiral Kuznetsov, began its first combat deployment to Syria with plenty of fanfare, but a recent report from IHS Jane's indicates Russia has given up entirely on launching strikes from the carrier. Satellite imagery obtained by Jane's shows Su-33 jets and one MiG-29KR previously aboard the carrier now stationed at the Hmeymim air base in Syria alongside land-based planes from Russia's air force. The Kuznetsov, never an entirely reliable system, had one of its MiG-29KRs crash in November, and another pilot had to eject after the Kuznetsov's landing gear failed and couldn't receive the aircraft". 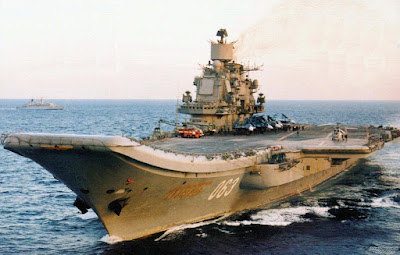 And let us say at a minimum the operation has not gone well!! Quit while you are ahead?