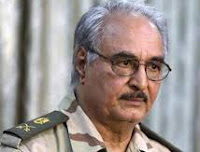 Once more from the latest edition of the DEBKAfile newsletter:

"New Putin move to win a military base in Libya"

"Libyan Gen Khalifa Hafter arrived in Moscow Sunday, Nov. 26, with a request for Russian arms and military support for his army. He was welcomed in Moscow, which saw an opening for Russia to gain its first military base in North Africa . . . President Vladimir Putin [has] began to envision a second Mediterranean base on the coast of Benghazi, twin to Hmeimim in Syria's Latakia. This one would accommodate Russian naval as well as air units and be located 700 kilometers from Europe . . . Russian planes in Hmeimim are capable of covering the 1,500 kilometers distance to Libya, while the Russian carrier Admiral Kusnetzev is anchored not far away, off Syria's Mediterranean shore. Both are therefore available for operations in support of the Libyan general [Hafter]."

It always have been thought that the Russian ever since the time of Peter the Great most desirous to acquire "warm weather ports". Russian naval power as able to be deployed at any time of the year. Black Sea ports yes, other Russian naval bases during the time of Imperial Russia and the Soviet Union no! Even to this very moment!