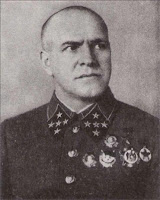 Continuing with more extracts from isegoria.net with my commentary:

"Where is Nomonhan in the list of vital battles?"

Nomonhan [1939] as referred to by the Japanese! Khalkin Gol to the Soviet!

"Yet where is Nomonhan in the list of vital battles we teach our high school and college students about WWII? Pretty much nowhere. Apropos another conversation on this blog, it seems that the professional military historians outside academia take the study of this battle a little more seriously."

Khalkin Gol that FIRST INSTANCE [?] of modern combined arms warfare as understood in the modern context? Coordinated attack by massed infantry, artillery, armor, air defense and tactical aviation in the ground-support role. Blitzkrieg attack with the breakthrough offensive as became the IDEAL form of waging war during WW2.

Zhukov recognized as a master of the operational art, able to command large bodies of troops and do with panache' exercising demonstrably great skill in the process. AT KHALGIN KOL THEORY BECAME PRACTICE!

DEFEAT AT KHALKIN GOL GREATLY DISSUADING THE JAPANESE FROM FURTHER MILITARY ACTION AGAINST THE SOVIET DURING WW2.

Japan for almost the entire duration of WW2 [until August 1945] observing with great strictness a posture of neutrality with regard to the Soviet Union, ALL BECAUSE OF A SINGLE BATTLE!

Grand strategy considerations even not in consonance with agreements of the Tripartite Axis foremost in the minds of the Japanese!