Thanks to the Internet article by Sarah Laskow.

"Built to fight a Nazi invasion, they remained unknown for decades" 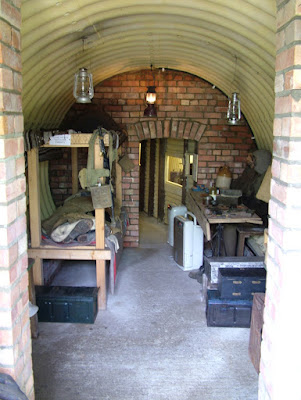 Several hundred of these surreptitious and hidden underground bunkers scattered throughout England. Able to accommodate a squad-sized number of troops part and parcel of the Auxiliary Units, irregulars and guerrillas, stay-behinds emerging to wreak havoc on the German invader. This particular image shows the inside of such a bunker under the most ideal of conditions I might assume.

Please do not worry about conditions as they might have been underground. Accommodations sparse, spartan and austere at best BUT THEN YOU WERE NOT EXPECTED TO LAST MORE THAN TWELVE DAYS!