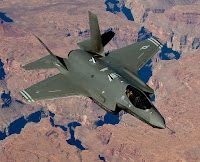 Regarding that previous previous blog entry reports concerning the operational capability of the F-35 Lightning, SENIOR PILOTS HAVING FLOWN THE F-35 LIGHTNING CAN FIND NOTHING BUT GOOD THINGS TO SAY ABOUT THE AIRCRAFT!

Gushing and going gaga even!

In conversation with an acknowledged aviation authority regarding the F-35 his comment most pertinent:

1. "Those pilots were all Lt. Colonels or Colonels in charge of the first squadrons or in charge of testing the planes, not your average run of the mill fighter pilot (as if there IS a run of the mill fighter pilot!!). However, having pointed out their inherent command influence and bias any new generation war machine is going to be head and shoulders above anything else out there now. (And, do you think for a New York minute that any of those men would be promoted if they gave anything BUT glowing reviews of the latest multi-billion dollar war weapon they are testing and telling Congress to keep the money flowing? Everyone from the Admirals on down to the lieutenants know that it took 20 years to get it to production, and there is no new backup if this thing is said to be a failure)."

2. "The real questions will be: will all those significant avionics really work in a wartime environment"

"gush - - 2. to express oneself extravagantly or emotionally; talk effusively:"

You the devoted reader to the blog have to decide these things for yourself.