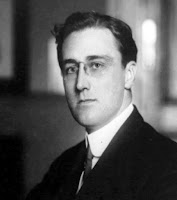 Continuing with extracts and my commentary from various entries as seen at the isegoria.net Internet web site Thanks once more in all instances to isegoria.net.:

"U.S. Assistant Secretary of the Navy Franklin Delano Roosevelt [FDR] took away several lessons from his experience during World War I."

Experiences of Franklin Roosevelt up front and close during the Great War exceedingly limited. FDR having thought highly [?] of himself for having visited the front, seen a dead horse and pulled the lanyard on an artillery piece, firing one round toward the German positions.

Lessons from the Great War as understood by Roosevelt nonetheless to include:

With regard to the latter think of the United Nations and the Security Council of same but not all nations as equals. The United States to be "boss of bosses" and that apparent to all!

"America running China as a puppet, reducing Britain to a compliant poodle shorn of its empire, and mesmerizing the USSR with personal charm"

That "personal charm" of President Roosevelt by that time [1945] much lessened and diminished. FDR SICK and those closest to the man well aware of that fact. FDR PROBABLY SHOULD NOT HAVE STOOD FOR RE-ELECTION  IN 1944 BUT DID AND THE REST IS HISTORY!