From the Internet web site Barents observer an update on the strange case of the beluga whale as found by Norwegian fishermen wearing some sort of "espionage" collar.

Article as dated 27 May.

From Google oblique satellite [?] photography some analysis of what is deemed a Russian marine mammal military program.

"These pens near the naval town of Polyarny on the Kola Peninsula might very well be the home from where runaway ‘Whaledimir’ beluga escaped from. Or was he brought to Norwegian waters on purpose?"

"Six beluga whales in pens are visible on this satellite image from Garyachie Ruchy in the Kola Bay, some 3,5 km south of the closed naval town of Polyarny on the Kola Peninsula. Image: Google Earth 3D / The Barents Observer". Click on image to see an enlarged view. 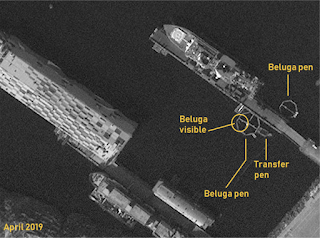 "This weekend, H I Sutton, a leading expert on Russia’s submarine fleet and known for publishing analysis based on Open Source Intelligence (OSINT) revealed a satellite image on the portal Covert Shores from April this year showing the appearances of two pens moored at a pier in Olenya Guba (Bay) on the Kola Peninsula. Inside one of the pens is what looks like a beluga whale swimming." Again, click on image to see an enlarged view.

Outstanding! And isn't it just amazing what one can do with a few keystrokes and movements of a mouse! The Internet has brought the average citizen technology that not so long ago was strictly reserved for the persons at the highest echelons of government.

That beluga whale too seems to be totally dependent on being fed by handlers and is not able to forage for itself. Expect a sudden and abrupt demise for Whaledimir