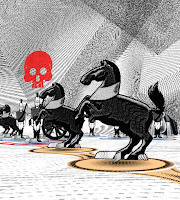 Without question and within the military dimension this particular article as obtained from the "War On The Rocks" Internet web site A MUST read for all devoted followers to the blog and those merely perusing casually. I recommend highly without qualification or reservation.

THE THIRD WORLD WAR [WW3] AND HOW IT WILL PLAY OUT. GREAT POWERS VERSUS GREAT POWERS, WORLD DOMINATION THE GOAL!

"HOW DOES THE NEXT GREAT POWER CONFLICT PLAY OUT? LESSONS FROM A WARGAME"

"The United States can win World War III, but it’s going to be ugly and it better end quick, or everyone starts looking for the nuclear trigger."

"That is the verdict of a Marine Corps War College wargame I organized that allowed students to fight a multiple great state conflict last week. To set the stage, the students were given an eight-year road-to-war"

I STRONGLY ENCOURAGE A SLOW AND CAREFUL READING OF THIS ARTICLE.

* American military forces fighting in all circumstances with allies in coalition warfare.

* Outcome predicated in measure according to future investments in war-winning technology.

* War waged initially with conventional weaponry, but with the use of fission or thermonuclear munitions always a dreaded possible.

Everyone has eight years to go according to the scenario. Make your investments now.