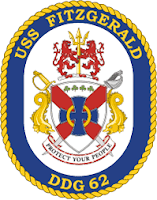 "Hot work is any work that involves burning, welding, using fire- or spark-producing tools, or that produces a source of ignition"

As is absolutely applicable to item # 1 from a most recent blog entry.

Thanks to the article by Ben Werner courtesy the United States Naval Institute.

"Cmdr. Garrett Miller, commanding officer of Fitzgerald, noted a series of more than 15 fire safety incidents aboard the ship since it arrived at the Ingalls Shipbuilding yard in Pascagoula, Miss., nearly 18 months ago. Fitzgerald was heavily damaged on June 17, 2017, when it collided with ACX Crystal off the coast of Japan, killing seven sailors in what was the first of two deadly DDG collisions with commercial ships that summer."

First the monumental cost just to repair a damaged modern warship! Second that number of "fire incidents" as the result of "hot work" excessive to say the least.

MORE DANGER TO THE WARSHIP WHILE AT DOCK AND IN REPAIR THAN WHILE AT SEA AND ON PATROL. SOMETHING NOT RIGHT HERE!