War as existing in three distinct and discernible stages:

2. The fighting of the war itself. The mortal combat.

3. The aftermath of the war.

With regard to number # 3 consider the Syrian Civil War and specifically so the most recent round of fighting between  the regular Turkish army troops and the insurgents of the SDF [Syrian Democratic Front].

THE ISLAMIC STATE APPARENTLY DEFEATED BY SDF COMBATANTS. NOW HOWEVER THE BATTLE CONTINUES WITH NEW OPPONENTS.

NOT EVERYONE HOWEVER AGREES!

ABOUT ONE-THIRD OF SYRIAN TERRITORY NOW WITHIN THE DE FACTO AUTHORITY OF THE SDF! 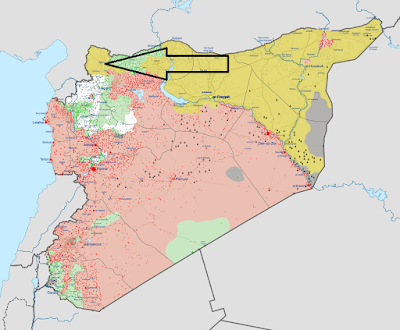 Both Assad and Erdogan [Turkey] categorize and consider the SDF [and especially the predominate Kurdish element] to be terrorists and not worthy of any thanks or praise. Turkish troops at this very moment being engaged with American supplied weaponry, an indirect instance of NATO fighting NATO!

SDF AGAIN STRONGLY SUPPORTED BY THE U.S. MILITARY EVEN RECEIVING AN AUTONOMOUS AND INDEPENDENT COUNTER-AIR CAPABILITY IN THE FORM OF STINGER [?] MANPAD [man portable air defense]!

The American military also giving strong [?] consideration to a resumption of support for the mostly defunct Free Syrian Army [FSA]? FSA previously not seen as a credible entity, but now thought to be a counter to the Assad/Iranian connection?

This gets complicated fast, doesn't it? The war against the Islamic State more or concluded? But it has only just begun?