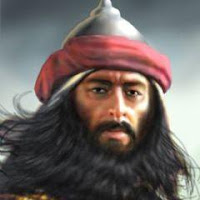 ANOTHER ALEXANDER THE GREAT? A MILITARY COMMANDER WHOSE NAME IS WORTHY OF INCLUSION AMONG THE TEN GREATEST GENERALS?

"While Islamic history is replete with extraordinary examples of military prowess and feats of arms, the majority of military historians tend to focus on the more familiar masters of the art of war. Historians usually count the likes of Napoleon Bonaparte, Julius Caesar, and even the feared Mongol steppe warrior, Genghis Khan, among the lofty ranks of the world’s Great Captains."

"Clearly these are all highly accomplished men of war and rightly deserve their recognition as some of the most gifted battlefield commanders and strategists in history, there are yet others who deserve to be held in similarly high esteem. Chief among these is Khalid bin al-Waleed, Islam’s first great general and a man so accomplished in war and personal combat that the Islamic Prophet Muhammad himself gave him the title of 'The Unsheathed Sword of Allah'."

A most senior commander as in the style of an Alexander not eschewing personal battlefield combat, leading from the front.

THAT MOSQUE AS DEDICATED TO KHALID SADLY HAVING SUSTAINED DAMAGE DURING RECENT FIGHTING IN SYRIA. AND TO THIS KHALID WOULD SAY?