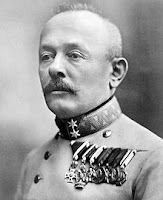 Back to the topic, general officers of World War One. The contrast as is the subject of this post could not be more striking!!

Consider these two senior military commanders from that era of the Great War as possible additions to LISTS as were the subject of prior blog entries.

1. "Ten Most Underrated generals." Add to that list the name of Svetozar Boroević.

"K.u.k. Feldmarschall Svetozar Boroević . . .  was an Austro-Hungarian field marshal who was described as one of the finest defensive strategists of the First World War.

With all respect consider defense to be the stronger form of combat. Easier to do and accomplish more with less!

2. "Ten Worst Generals." Add to that list the name of Luigi Cardona.

Marshal of Italy Luigi Cadorna . . . was an Italian General and Marshal of Italy, most famous for being the Chief of Staff of the Italian Army during the first part of World War I.

Historians record Cadorna as an unimaginative martinet who was ruthless with his troops and dismissive of his country's political authorities. David Stevenson, Professor of International History at the London School of Economics, describes him as earning 'opprobrium as one of the most callous and incompetent of First World War commanders.'"

"martinet - - noun 1. a strict disciplinarian, especially a military one. 2. someone who stubbornly adheres to methods or rules."

It doesn't get much worse than that. And that too during a time of war when most all the senior commanders seemed to be rather incompetent or downright acknowledged as being so.

The good, the bad, and no ugly!