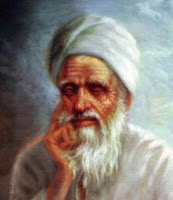 "Iconoclasm - - Iconoclasm is the social belief in the importance of the destruction of usually religious icons and other images or monuments, most frequently for religious or political reasons "

The destruction by the Taliban of the famous Buddhist statues in Afghan I heard of. This decapitation of this particular statue I had not hear of.

"The 11th Century poet who pissed off al-Qaeda"

"In the spring of 2013, fighters from Jabhat al-Nusra, the Syrian offshoot of al Qaeda, beheaded the statue of an 11th Century poet."

"Almost 1,000 years after his death, what was so dangerous about this writer that warranted his symbolic decapitation?"

"You’ve had your way a long, long time,
You kings and tyrants,
And still you work injustice hour by hour.
What ails you that do not tread a path of glory?
A man may take the field, although he love the bower."

"But some hope a divine leader with prophetic voice
Will rise amid the gazing silent ranks.
An idle thought! There’s none to lead but reason,
To point the morning and the evening ways."

"This iconoclastic moment was more than the destruction of a piece of modern Syrian cultural heritage, it was the collision of two historical trajectories that represent the nexus of clashing ideologies of the modern Arab world. The scene was reminiscent of an inverted version of the French revolution, where religious effigies lost their heads to the mobs of Robespierre. The stage was set: on one side, a modern ideology reacting against liberalism and hearkening back to an imagined Golden Age; on the other, a medieval thinker looking forward towards a liberal modernity."