We are meant to be impressed. But hardly are?

From the South China Morning Post Hong Kong edition we have this item:

Nothing new here folks! Move along? 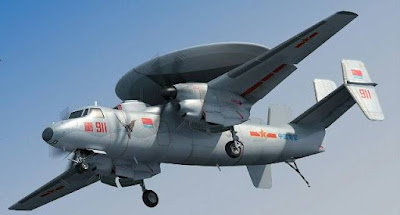 The KJ-600 airborne early-warning [AEW] warplane. Remarkably similar to the American Hawkeye. The KJ has a tail-hook. But can it take-off and land on a ski-jump aircraft carrier?

"China is developing a surveillance plane designed to be launched from the country’s newest aircraft carrier and fitted with a radar system to spot enemy stealth jets, military observers say."

"State media confirmed for the first time on Monday that China was building its first carrier-borne early-warning plane called the KJ-600."

EQUIPPED WITH TAIL HOOK BUT IS IT ABLE TO TAKE-OFF FROM A SKI-JUMP STYLE CARRIER? THE CHINESE HAVE A LARGE-DECK SIZE CARRIERS IN THE WORKS [002 and 003] THAT WILL BE BIG-DECK CARRIERS SIMILAR TO AN AMERICAN NIMITZ CLASS CVN!

Aircraft carriers of the ski-jump style warship lacking [?] in the area of AEW, EW,  ASW, tanker and utility warplanes? Reliant on land-based naval aviation to a large extent? 002 and 003 type Chinese aircraft carriers if and when taking to sea able to include a full complement of warplanes? This remains to be seen.