"Who is attacking Russia’s bases in Syria? A new mystery emerges in the war."

From a variety of sources thanks to the tip from Freeper more on the UAV/drone attack on the Russian airbase.

"BEIRUT — A series of mysterious attacks against the main Russian military base in Syria, including one conducted by a swarm of armed miniature drones, has exposed Russia’s continued vulnerability in the country despite recent claims of victory by President Vladimir Putin." 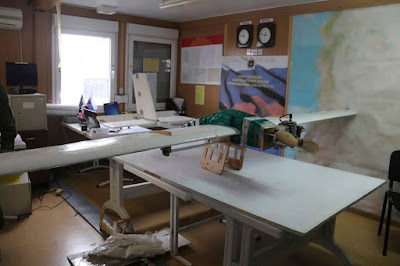 Purportedly this is one of the drones that attacked the Russian airbase and has been recovered in the aftermath. Doesn't look like much but even a very small amount of high explosive in proximity to a modern high-performance can do a lot of damage.

"The attacks have also spurred a flurry of questions over who may be responsible for what amounts to the biggest military challenge yet to Russia’s role in Syria, just when Moscow is seeking to wind its presence down."

Lots of potential culprits. Presumably the same folks that did that most recent mortar attack. Again, WHO are you?