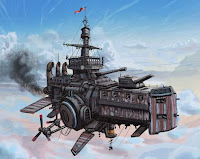 YES, but can it fly?

Thanks to Deviant Art for the image and the original story courtesy the Wall Street Journal.

"Here's how to transform a supertanker into a highly armed, virtually unsinkable warship."

The Total Package! From the article as seen in the Wall Street Journal by William Lloyd Stearman. THE BIG SHIP CONCEPT!

A U.S. MARINE EXPEDITIONARY UNIT SELF-CONTAINED WITH ALL THE SUFFICIENT FIRE-POWER NEEDED AND ALL IN ONE WARSHIP.

Warplanes to include a variety of * Helicopters * Tilt-rotor aircraft * Fighters planes. * Drones. UAV.

But can it fly?? More on this my thoughts to follow.