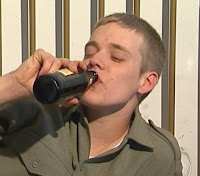 From the New York Tribune as dated TUESDAY, JANUARY 8, 1918. Thanks to the tip from Freeper.

"Declares He Is Misquoted, and That the Troops Are Well Protected"

"A shocking indictment of the American army in France on grounds of intemperance, immorality and depravity is contained in a 'Clip Sheet' prepared and published by the Board of Temperance, Prohibition and Public Morals of the Methodist Episcopal Church. This board is a regularly Constituted and authorized adjunct of the Church."

"'Any American soldier having illicit relations with a woman must report for prophylactic treatment within six hours. This precaution almost insures immunity from disease. In France today soldiers who pass the harlots with high head when sober fall into their welcoming arms when drunk, and in their irresponsible condition fail to report for treatment until the hours of opportunity have passed, and are they are out of the war with foul bodies, crushed hearts and everlasting shame upon their heads.'"

MILITARY MEN PERIOD BEHAVING BADLY IN THE ANCIENT AND VENERABLE WAY?  AS IT WAS IN 1918 HAS ABOUT THE SAME AS IT ALWAYS HAS BEEN?