The Suwalki Gap as it is called suddenly out of nowhere has become a hot-button item? Herewith an index of articles from the Internet that danger as perceived by NATO planners.

THE FEAR THAT BIG RED WILL MOVE WEST!

"Russian maneuvering around a 60-mile stretch of Poland called the 'Suwalki gap' has heightened tensions in NATO, the U.S. Army commander in Europe said ..." 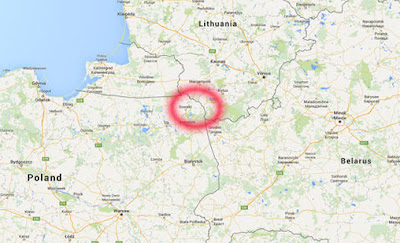 Suwalki [circled in red] at that point where Belorussia, Lithuania and Poland join. Click on image to see an enlarged view.

"Russian missiles from Kaliningrad could block eastern Poland and the Baltic States from NATO support."

"Should Vladimir Putin decide to invade a Baltic state, Poland's 'Suwalki Gap' would be perfect for advancing Russian tanks."

"A new concept recently appeared in the language of the US military: 'Suwalki Gap' - the land corridor between Poland and Lithuania, or ..."

" Kaliningrad and the Suwałki Gap ... MiG-29s and Su-22s and in a worst case scenario the Suwalki Gap would be very costly and deadly real estate. ..."

7. "Inside The Suwalki Gap - Roads and Kingdoms"

"In the Suwalki Gap, the 64-mile border between Poland and Lithuania, tensions are high. This is the only border the Baltic states share with the rest of NATO."

OBJECTIVE OBVIOUSLY THE RUSSIAN BALTIC ENCLAVE OF KALININGRAD, CREATE A LAND BRIDGE AND CORRIDOR UNDER PRETEXT, HEEDLESS TO THE TERRITORY OF NATO PARTNERS POLAND AND LITHUANIA.